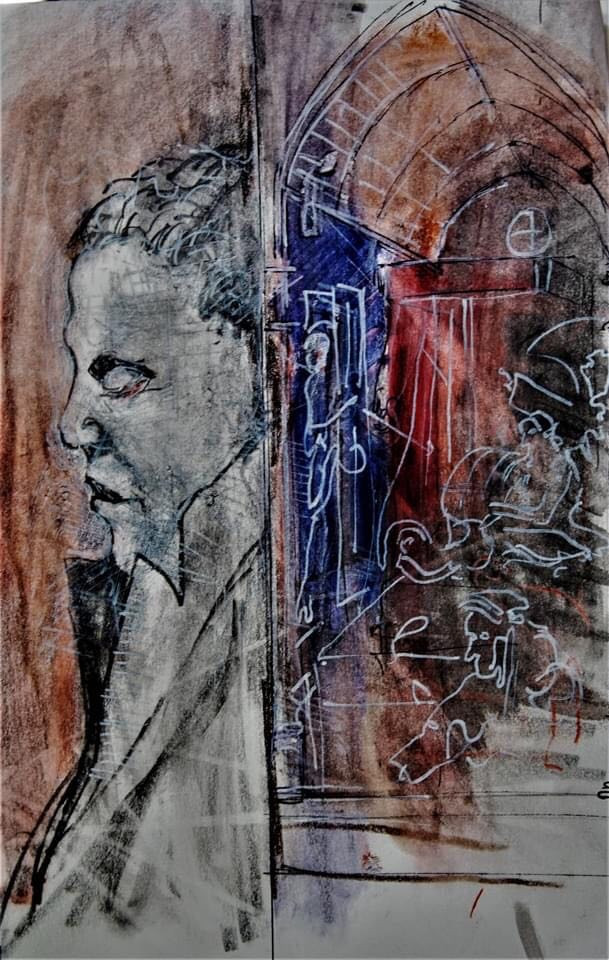 The Prophecies of Merlin (Symphony for Violin & Orchestra) is now ready to post-off to Austria and the ORF Radio – Symphonieorchester Wien for our recording collaboration the end of August beginning of September!! The Prophecies of Merlin has taken me two years to get to this stage with a score that is 409 pages in length and consists of 1836 bars!!

`The Prophecies of Merlin’ is written for and dedicated to conductor Neil Thomson and the violinist Peter Sheppard Skærved, with an additional and special dedication to my wife, Stella.

`The Prophecies of Merlin’ is a symphony for violin and orchestra inspired by the `Historia Brittonum’ and `Vita Merlini’, both poetic histories written by Geoffrey of Monmouth in the first half of the 12th century. Though Monmouth intended his writings to be a factual account of Merlin’s life, they have no historical basis but nevertheless  provide a captivating story spawned from the author’s vivid imagination. One notable tale describes how Merlin used magic to bring the great stone megaliths from Ireland and create their new resting place at Stonehenge. The author also recounts how Merlin’s sorcery helped disguise King Uther Pendragon so that he could enter Tintagel castle and sleep with his enemy’s wife, Igraine. From this subterfuge Arthur, the future king, was to be born. 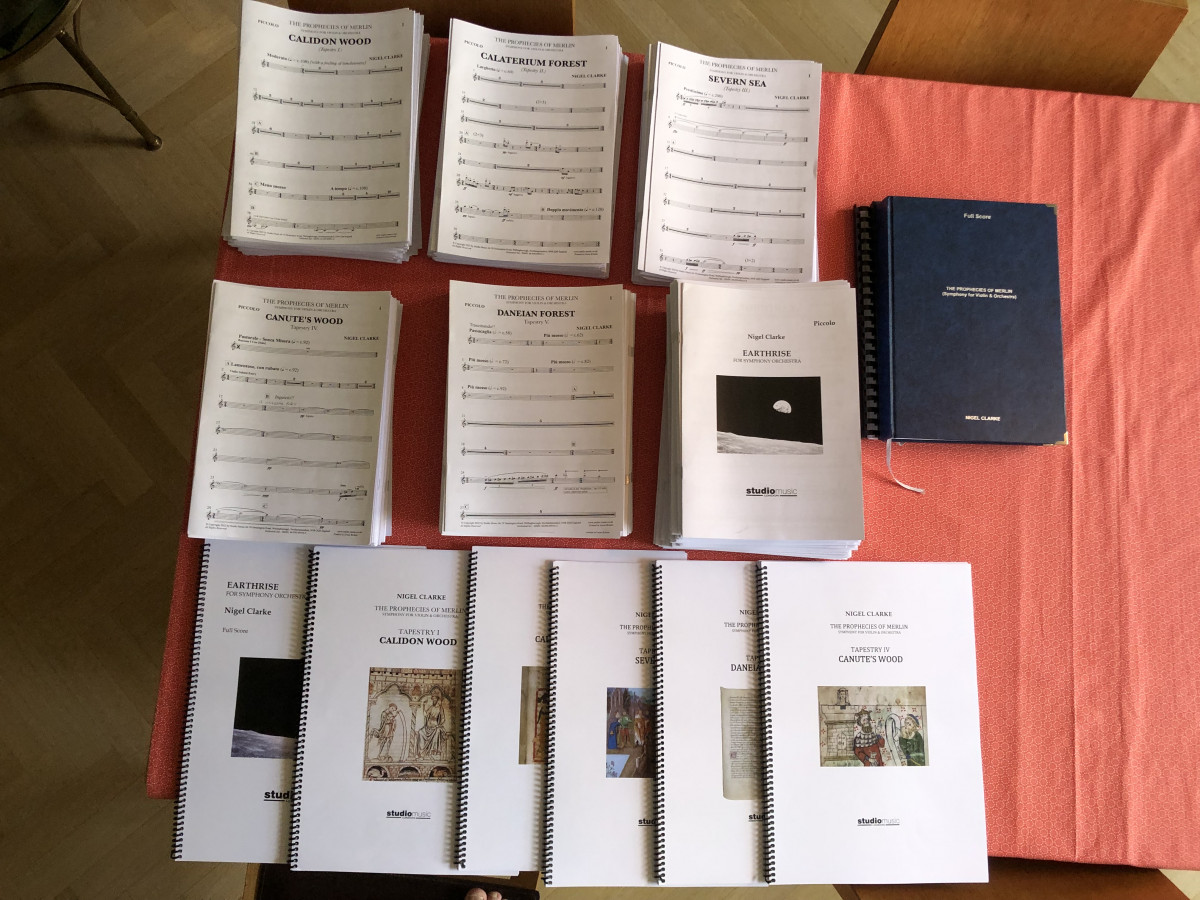 with the Scots. Distraught from the slaughter of so many of his comrades, Merlin flees the conflict and takes shelter in the Calidon Wood. There he lives the life of a hermit, existing on a simple diet of fruit, berries and nuts. Winter brings him near to starvation, until news of Merlin’s solitude reaches his sister Ganieda (wife of the Cumbrian King Rodarchus), who summons her brother to court. Ganieda temporarily soothes his madness with music and song, but as a precaution, she also ensures that Merlin is incarcerated in chains for his safety. Once lucid and cleansed of madness, Merlin convinces his sister and the King that he is a prophet and that it is safe for him to return to the Forest. There, whilst studying the night sky and contemplating the universe and the world’s distant islands, Merlin sets about prophesying Britain’s alarming future.

His vision tells of two dragons, one red (a metaphor for Britain), and one white (representing the dominant Germanic Saxons). Merlin predicts that mountains and valleys would be levelled and rivers and streams would run with blood. Addressing King Rodarchus,Merlin describes how men would grieve the destruction of their cities, that the Severn Sea wouldburn and boil for seven months, fish would die and from their dead carcasses, serpents would be born. Merlin also 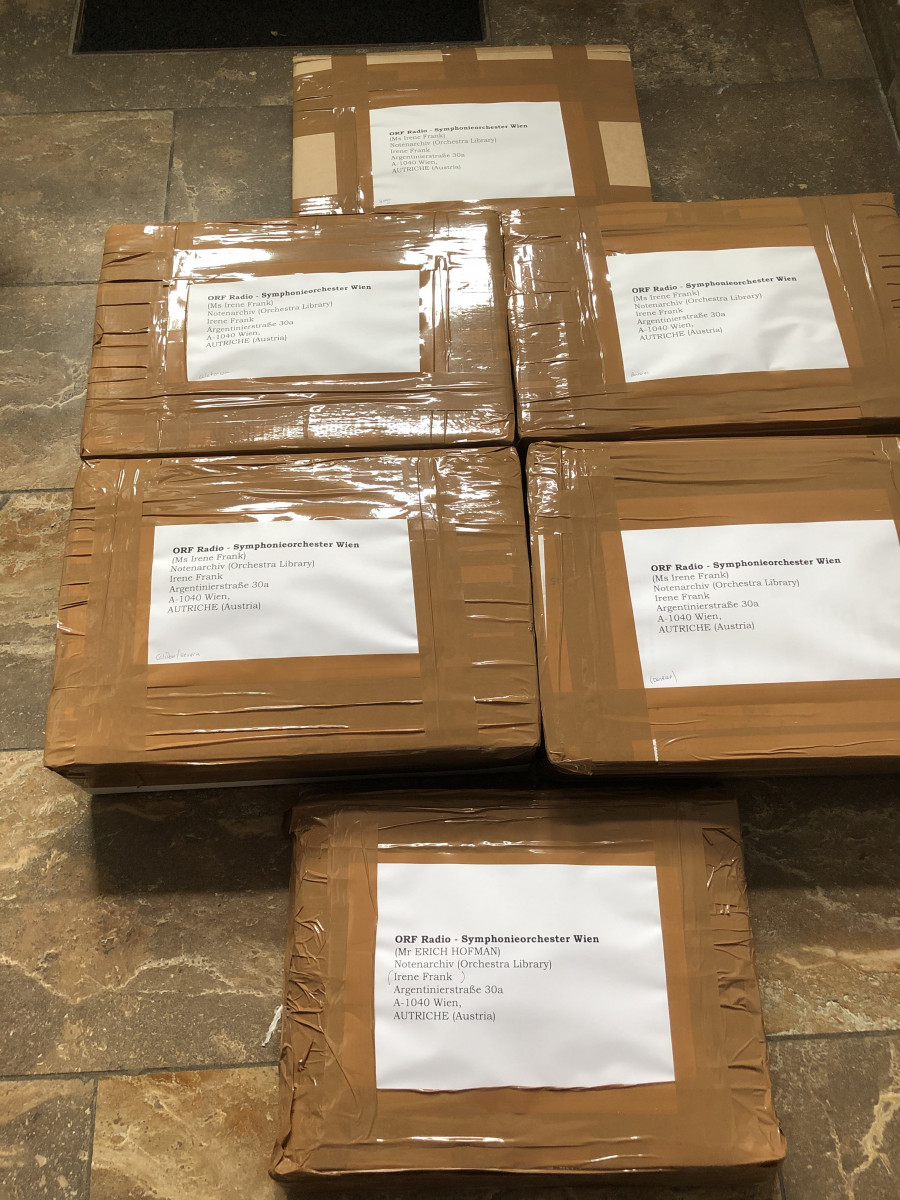 prophecies that King Arthur (the “Boar of Cornwall”) would trample on the necks of the Saxon invaders and that a shower of blood would fall from the sky and afflict humanity with starvation. There would be the strangest happenings in England, traitors would preach, men would be imprisoned and many others would go to war. Britain would tear itself to pieces, the River Thames would turn to blood, while elemental winds would do battle and ill-omens would resonate through the constellations. Merlin’s terrifying and crazed prophecies continue relentlessly, butat a certain moment in Monmouth’s tale a spring of water magically appears in the Forest. Merlin drinks from the Spring and his madness is finally cured. After a few more twists and turns, Merlin renounces his gift of seeing into the future, and the tale ends with the protagonist continuing to live in the Forest in what has become a godless world.

`The Prophecies of Merlin’  is written as if each of its five movements are a medieval wall tapestry. I have named each Tapestry after a location mentioned in Monmouth’s writings, though I have not detailed to the listener any specific prophecy within each Tapestry. Merlin is represented by the solo violin and is both protagonist and a tutti orchestral player.